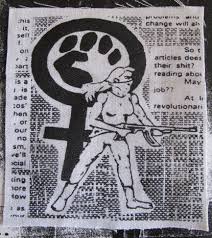 I was recently at a party where I mentioned that my paper on the three Greek works from which we read selections (the Iliad, the Odyssey, and the Aeneid - I'm seeking my B.A., if you didn't know) would actually be on how the women in these stories wield power. I didn't mention how much it irked me that in these three great works, the woman's role is really minimal, and mortal women especially are mostly portrayed as powerless pawns of their hero male family members and the gods, because, well, I didn't want to be that girl
at the party.

Little did I know, the person to whom I was speaking - a friend's husband, both of whom I had admired for other reasons - happened to have gotten his degree in feminine studies. The friend told me that her husband knew all about how women wield power. He laughed and said that what his degree was really about was how to create a society in which women are truly equal.

He mentioned the American and French schools of thought on gender equality, and said that the French school of thought - which is less popular - states that so long as women are living in a value-system created by men, the society cannot truly be objective; women will never be free from sexism, even when it's women talking about women, because they have to talk about it using the male-created terms. What women really need, he said, is their own pantheon, made up of deities that reflect women's values. (And here we see why it's not very popular. How many feminists do you know who are willing to abandon their faith to create and follow their own pantheon?)

And that got me to thinking: What's the one god that women really need? If I was going to create a pantheon for women, who would be in it? What would they look like? Do we need a healer? A fertility deity? A warrior? A beauty queen? A peace-maker? A wisdom deity? Do they have to all be women?

In Samuel Butler's translation of the Aeneid (why didn't my department head choose Fitzgerald? Maybe s/he was trying to be new and different?), Cupid, the god of love, takes on a boy's appearance so that when he greets Queen Dido and she hugs him, he can poison her to become infatuated with Aeneas. Because it's prepubescent boys that inspire love and infatuation? I don't think so.

Although, I'm not sure I'd have a love deity. Love is a property that should belong to every deity. I would have a fertility deity, but I think she'd also be the anti-fertility deity. She'd be the one you prayed to when it was month 5 of "we're trying to get pregnant" and day two of, "am I late, or did I count wrong?" and day 12 of, "okay, I planted, I watered... Now what?" and whenever you think of people facing drought or famine. Maybe she'd also be the one in charge of New Ideas and Healthy Changes. She'd be the one writers and artists and inventors prayed to.


What deity do you think women need?
Posted by Jenn Carson at 10:20 AM