In a creative writing class, we were taught to avoid adverbs if at all possible. I had spent this other class (a class on writing a novella) wishing for a "highlight adverbs" feature in Microsoft Word, or in Scrivener.

I hit Scrivener's feature request forum and did a search on "adverbs." Who'd have guessed I wasn't the first person to have the idea. The request was denied, but one of the comments referenced The Hemingway Editor.

The Hemingway Editor is a web-based app, but there is a downloadable desktop app. I only used the web-based one. It allows you to paste text into the editor, or compose within it.

It grades your writing based on the number of sentences and words. The lower the grade, the better the writing. The grade may be commiserate with school grade levels - i.e., if it's rated a grade 4, a 4th grader could read it. 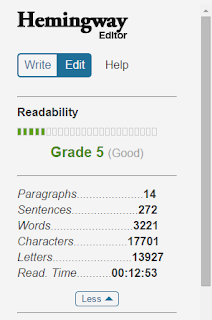 You can paste a surprising amount of text into that window and it doesn't crash. Like, more than 5,500 words.

The mechanism to find difficult-to-read sentences is nuanced enough that it has two levels of difficulty, "hard" and "very hard." 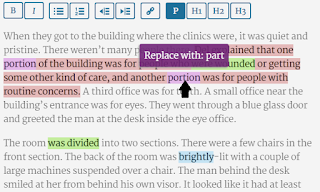 You can format the text in the editor. There are options to make lists, use bold and italics, and the normal rich-text options.

It doesn't find all the adverbs. It finds the ones with an "ly" ending, but misses "only," "even," "never," and some others.

If you paste a lot of words into the app, it can get confused. Switching the toggle from Edit to Write, pasting the text, and toggling back to Edit fixes this.

Pasting from Scrivener really confused Hemingway. The hard returns didn't transfer over, and this had an impact on the grading and on which sentences it thought were "very difficult." Often, adding a hard return where there should have been one downgraded the difficulty level and upped my grade.

It really wants you to write short sentences. Sentences without clauses. Simple sentences, with only one comma. That's great sometimes, but gets old after a while. I blame Hemingway himself for that one.
Posted by Jenn Carson at 10:16 AM No comments:

I've written about this picture before.

I thought maybe it was a common theme in the Catholic tradition. I thought, if I Googled, I would find all kinds of stained glass windows, and paintings, and sculptures. They aren't there. There's just this, and a song by Rain For Roots. Rain for Roots doesn't acknowledge this picture as an inspiration for the song, but I have my suspicions.

This picture is so powerful. Eve stands, covered by her locks of hair. Eve, who catches the blame for all sin, ever.* In this picture, she's still clutching the apple. The serpent is still wound around her leg, dragging her back into sin. Pregnant Mary stands opposite her. Mary, herself deserving of some consolation. Mary cups Eve's face in one hand, and holds Eve's hand to her belly with the other. The serpent's head is crushed under her foot. Eve's head is still bent in shame. Mary bends her head as if inviting Eve to raise her eyes.

Even Eve, the representative of all that is wrong with the world, is not beyond Christ's redemption. He was born and he died for all sin. Even that one. Even mine. Even yours. 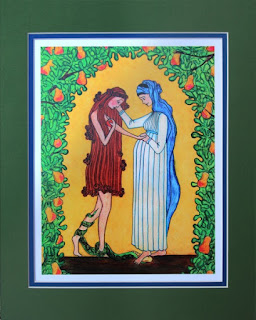 I wanted to know more about how this picture happened. Fortunately, there's a podcast with an interview of Sister Grace Remmington by Pat Gohn. Sister Grace comes on at about 23:00. She starts talking about the picture at about 30:52.

Sister Grace says she doesn't consider herself an artist. She just doodles, usually when she's thinking. She was thinking about the difference between Mary and Eve when she doodled this. She says, "Perhaps it was the experience of living in a fallen world that made Mary realize... our need for God."

She says that Eve, still within sin's reach, unable to let go of the apple, spoke to the human condition, too, about our "inability to let go" of our sinful habits.

* I fervently believe that Eve does not deserve all the blame for all the sin. She had a lot of help falling from Grace, and even if she does deserve all that blame, perhaps she should also get some credit for developing humanity's free will. But that's another blog post.
Posted by Jenn Carson at 12:59 PM No comments:

Please Stop Clicking That Link (Or, The Very Public Face of... You pt. 2)

Several years ago, I had a bad week. I had joined a charitable organization, found myself overwhelmed and unable to contribute, and tried to make a graceful exit. And things went sideways. After a lot of thought, I blogged about it.

I was angry. I received some bad treatment at the hands of some one I had trusted. So, I outed that person. I shared - in anger - the things that person said, and the things I had said. That person had made some racist comments, and I called that person out. In anger. Because poor treatment and racism make me angry. 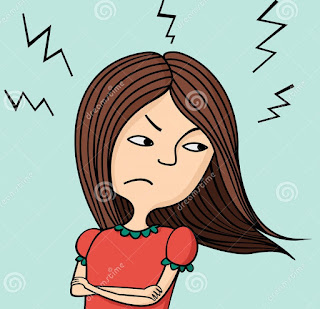 Funny/sad thing is, it's one of my most popular posts. I keep hoping that it'll fall into obscurity, like my other posts. But the stupid thing is in my top-ten for any given month, and it's been my second-most-seen post of all time for years, beaten only by a knitting pattern.

So, when I was playing with my blog layout, I took that into consideration. Should I use a side-bar with my top-five? Should I just go delete that post? Is there anything in it I should be ashamed of? 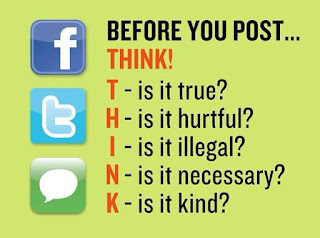 I keep thinking about it, though. I T.H.I.N.K. Was the post True? Yes. Was it Helpful? Maybe, as a cautionary tale. Was it Illegal? Certainly not. Was it Necessary? So much of the internet isn't necessary. It was necessary for me to vent at the time that I wrote it. Was it Kind? No, but being a Dr. Who fan, I aim for "never cruel nor cowardly." I'm not sure I even want to aim for "always kind."

I could delete it... but nothing you put on the internet is ever truly gone. It would exist somewhere. Besides, it is a part of me. I really did that. It was me. Not my finest moment, but also not my worst (I don't put those on the internet). 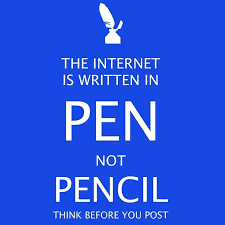 I decided to put the top-five posts this month on the blog and hope that puppy stays down around 7 or 8. I won't hide from a years-old moment of questionable judgement. If I'm ever a presidential candidate, I'm sure some one will bring that up (unless they can dig up my really good dirt). Until then, please stop clicking that link.

Edit: Part 1 of The Very Public Face of... You was about marketing and privacy.
Posted by Jenn Carson at 10:53 PM 1 comment:

4 Things The Wiz - Live! Got Right

I watched NBC's The Wiz - Live! last night (most of it - I missed the first hour). I had never seen any version of the play. If you missed it, you should go see it - it's still available on NBC's website. 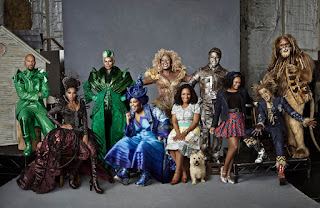 Here are four places this version really nailed it.

The lead was played by Shanice Williams. Don't feel bad if you don't recognize her name. According to IMDB, she's best known for her role in The National Dog Show Presented by Purina. Yeah, I didn't see that, either. She got the role that was previously played by Ashanti and Diana Ross in other versions, and she killed it.

Other talented, but little-known actors include Amber Riley (Glee and a made-for-TV movie), Elijah Kelley (The Butler and a few other movies), and Uzo Aduba (OITNB, mostly).

She was framed by some major names, too - Ne-Yo, Queen Latifah, Common, David Allen Grier, and Mary J. Blige. They provided draw, boosting viewership, and lending exposure to Williams and her fellow actors.

Hollywood needs this. Hollywood needs more African American actors earning money, making great films, and supporting each other. Those awards shows are still awfully predictable. That can change. This is part of that change.

Take a deep breath and stick with me through this point, okay?

While movies are more likely now to star African Americans, the actors often don't speak or dress any differently than their white counterparts (Annie, I'm looking at you). Aside from the color of their skin, they may as well be white.

The Wiz - Live! might engender criticism for having the characters speak in slang, but these characters are African American. They aren't African Americans striving to conform to the dominant culture in order to achieve success - by dressing like successful white people, or by talking like successful white people, for example. They find success not despite their identity, not because of their identity, but within their identity. And it's glorious.

Queen Latifah is the successful ruler of the Emerald City as the Wizard. Aduba and Riley (as Glinda and Addaperle) are successful Good Witches. Dorothy, Tin Man, Lion, and Scarecrow face challenges and rise above them. They don't conform to the (non-existent, in this film) dominant white culture in order to do so. They do it slang, clothing, and stereotypes included. They do it as they are.

Shanice Williams was adorable in her little plaid skirt. Mary J. Blige looked amazing in her costumes, and Uzo Aduba and Amber Riley looked beautiful in their dresses. None of these women are exactly tiny. And I loved seeing that.

I know - that stuff wouldn't have fit in that play. It was written about characters who wouldn't have worried about those things. But gosh. It was so refreshing to see stars on stage who, I felt, sort of looked like me.

4. It Passed the Bechdel Test

The Bechdel test presents a series of wickets for a movie (or book, or video game, etc.) to hit: it has to have at least two female characters who talk to each other about something other than a man.

With Queen Latifah playing a definitely feminine Wizard (though she doesn't necessarily look very feminine at first), and Aduba and Riley as the good witches, there were a few scenes where the women spoke to Dorothy.

It was women acting like women. (Mostly) supporting each other. It passed the test with flying colors.

That scene when Dorothy confronted Evillene was one of the best scenes I saw. Dorothy starts hurling insults about Evillene, and Evillene responds with, "If I'm wicked, what does that make you?"

She launches into a list of Dorothy's offences. She killed the other witch and then stole her shoes before the body was even cold. Dorothy didn't have a good comeback for that.

I wish the moment had been more powerful. There was potential for Dorothy to have self-doubt or defensiveness... but she kind of glossed over it.

The other point was made by the Wizard. The Wizard explained that things in Oz worked before Dorothy came. There was balance. Everyone knew their place. Then Dorothy went witch-killing and upset everything. Again, Dorothy never addressed that accusation, or even seemed to acknowledge it.
Posted by Jenn Carson at 10:23 PM No comments: