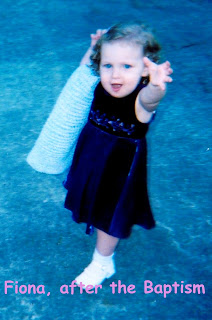 I used to think I could crochet. Back when I thought this, and I was pregnant, I did crochet. I glanced at a baby blanket pattern, which called for two strands of yarn held together, and decided to make my own version. I got some fingering-weight acrylic with a good amount of shine - two skeins in New Mint and two in White. I started out with double crochet and went to town. The only problem was, I had a bad eye for proportions, a touch of laziness in crocheting, and absolutely no ability to turn my work correctly. The result was a long skinny piece of material with wavey edges. In hopes of evening it out a bit, I picked one wavey side, and crocheted along the edge for several rows in single-crochet. It was a wreck and by the time I finished, the baby had already been born. This is why I knit.
So, naturally it was this monstrosity of a blankie that my new daughter decided was The Blankie. She named it (him) Blankily, and took him everywhere. 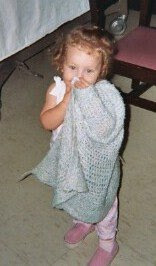 So, there we were waiting for The Runner to finish his Thanksgiving day marathon, on the sidewalk near the Olympic gate in Atlanta, about 150 feet up from the finish line. 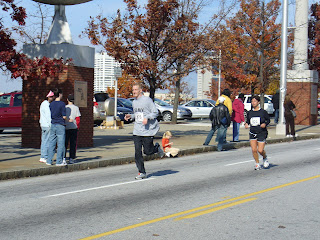 I told the children that they could run alongside their father when they saw him, but we had arrived a little early. The kids sat on the curb and busied themselves cracking acorns to see the meat inside. When I spotted The Runner, I told the kids to get ready. We mostly kept up until the finish line.


The Runner passed out some JellyBelly Sports Beans he had been given, had tried, had not liked, and the kids scarfed them up. They're like really gooey blue jelly beans. The Runner grabbed some of the fruit that was provided by the Atlanta Track Club, took a little breather, collected his belongings, and we headed back to Nana's house.


That night, she asked for Blankily. We looked a bit, then I had the idea to check my camera, since I knew she had brought him to the race. 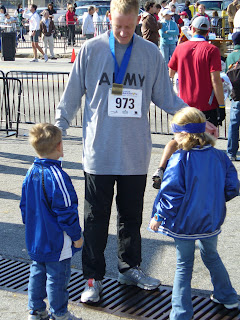 So, I was fortunate to find one skein of New Mint and most of a skein of White from seven years ago stuffed in the bottom drawer of my Stash (thank you, yarn gods!!) and am knitting like mad. The Runner thinks I can get it done by tomorrow night. I don't think there's enough yarn left. I think I will run out of yarn and have to frog it out and make it narrower and start over. I think even if I don't, there's no way I'll be able to get it done by tomorrow night.
Posted by Jenn Carson at 2:33 PM 2 comments:

A Failed Attempt at Outdoor Knitting, or A Few of My Favorite Things

Yes, that is a pile of cats sitting on my lap, on top of my knitting, as I'm trying to knit it. So, like any good cat owner, what I do? Knit calmly and slowly, being careful not to disturb the pile of cats. Who's evolved?

I got the coolest knitting compliment ever. Petra, a lady who works in my dentist's office, saw me knitting. She's German and I know from the last time I went in that she's probably been knitting longer than I've been putting my own pants on. She complimented my evenness of stitches and taught me the German word for cable knitting - Sopf. It means braiding. Sopf is the same word applied to braiding hair. Of course, I'm looking through online translators now and am not finding it. But whatever.

Speaking of "a few of my favorite things," I'm once again considering starting a fiber-enthusiast group at work. We have a little cafe nearby. We could sit in there and sew-knit-crochet-scrapbook for an hour on Wednesday afternoons. Right? I don't know. I'm scared. What if you threw a party and nobody came?
Posted by Jenn Carson at 8:40 PM 3 comments:

Finding new yarn and needles in your mailbox. Wheeee!!

Even MORE happiness is finding yarn in your mailbox on consecutive days. Hurry UP, second batch of yarn!
Posted by Jenn Carson at 10:29 PM 4 comments: