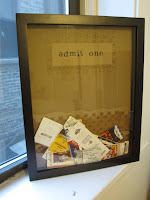 I had seen a decorated shadow box for movie and event tickets on Pinterest, and loved it, but we don't see that many movies or go to that many ticketed events; it's just not what we do. Then a few of my friends posted pictures of decorated jars into which one puts memories noted on decorative paper. So, I thought, why not combine the ideas into a memory shadow box?

So I searched for the blogs with the shadow box ideas, but neither of them discussed how to put the slot or hole or whatever to put things in, despite the many queries from people commenting on the blogs. (Update: the owner of Learn to do it yourself (her shadow box is pictured above) did finally post a tutorial for making slots from ehow.) Fortunately, I have a great support network, all of whom supportively told me to "get a Dremel, dummy!"

One of them was also able to advise me in which one to buy (bottom-of-the-line Dremel brand at Home Depot), which attachments to get for it (the big box with a ton of options for $20) and how to use it (carefully).

By the way, we did discuss cutting a section out of the top of the shadow box, using a fine-toothed saw, and attaching a knob to that section, to make a liftable lid, like the top of a carved pumpkin, but decided this was more likely to break the glass and go poorly in general.

Start by putting painter's tape over the place where you are going to make the 2" slot. This keeps the edges of the hole from cracking and chipping. I don't know why, but I can tell you that the one we taped turned out great, while the one we didn't turned out merely "okay." This was my crafty friend's idea.

We cut a guide-groove first, using the grinding wheel attachment. We cut as far down as we could before switching to the conical grinder. If you do it this way, be careful not to go so far that the other parts of the dremel rub against the frame.
I started putting together my background. I'd only had one experience with scrap-booking and it didn't end well. This time, I used her e-6000 glue and my "Amazing Goop Craft Arte" to tack my background paper in place on the felt backing of the shadow box and put the rest of the background in place. I used a piece of card stock to spread out the glue on the pieces I was going to stick down, and it worked like a charm.

While I was re-learning how to scrap-book, my crafty friend was designing lettering and a film-strip decoration in black acrylic paint for the glass in her shadow-box. She chose a gold sparkly background, to make a glamorous Hollywood theme to hold her event tickets. Great success!!

By the way, even though most picture frames don't have an "upside down." If you put it together wrong, you just take the picture out and turn it right-side-up. These definitely do have an upside-down. When you're pasting your background together, pay attention to the hardware on the back. You have to paste the background right side up, or else you have to go get hardware to Amazing Goop onto the back of your shadow box.
An integral part of this project (to me) is having the paper and a pen handy for recording the memories. So, when I got home, I used Sculpey to make a holder for the 2x3" card stock I had bought for this project. I used a cake pan to mold one, and used the plastic-wrapped card stock to mold the other. I had to carefully peel the Sculpey off the card stock, and it got a little misshapen, but I think it turned out better than the cake-pan one.
I whipped out my trusty Dremel, and attached the coarse cylindrical grinder, and trimmed the edges until the "pocket" fit onto the frame and the part where I would glue it to the frame was as close to straight as I could get it. I laid down a thick bead of Amazing Goop, let it set and attached the pocket.

I stuck a strip of adhesive Velcro to the top to hide the skin mark I made with the Dremel to attach the pen that had the other side of the Velcro stuck to it, and voila!