I was supposed to be a discussion leader for the discussion on selections from Chaucer's Canterbury Tales this week, but there was a bit of a communications error, and my thunder totally got stolen. That's okay - I'm pretty sure I'll get to do Arthurian Heroes, which is almost as cool.

I had gone to some trouble to prepare this "Discussion Leader" post, and had thought of two things I really wanted to share in addition to the academic bits. So I whipped up some rhymed couplets. *Ahem* Forthwith:

Geoffrey Chaucer Hath a mighty blog
Which loaded with witticisms is; that churlish dog
Updates his posts on so seldom a moon,
Causing geeks like me to nearly swoon.
One may find the blog (and ken the dog anon)
At House of Flame, blogspot dot com
But whilst I dally with you here a time,
Allow a goodwife yet one more little rhyme.
I saw a comic upon the Google Plus,
As I was dawdling on this forum; it is attached, thus,
Click the attachment and humor you will see,
About the Middle Ages, that which tickles me. 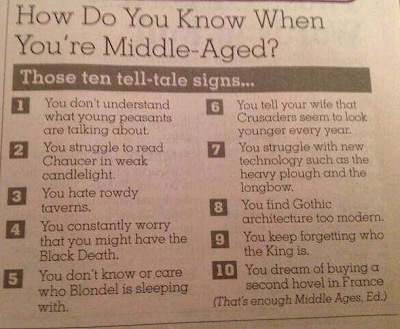 The school's forum thingie is painfully out-moded, so the image below was an attachment that had to be "clicked" rather than just displayed in the post.

By the way, if you need a bawdy laugh, and/or if you haven't recently, find a nearby copy of the Tales, and read the Wife of Bath's Tale. Omg. Hysterical.
Posted by Jenn Carson at 10:15 PM 3 comments:


Why would anyone trust a system designed to increase communication and increase the sharing of our information to do the opposite of that, especially when millions of dollars are at stake?

If you put a picture on any picture sharing site; or words or a picture on any social media site; if you publicly "like" or +1 something, you really should just assume that it's being datamined at best, and used against you and your friends at worst, and that's just from the marketing angle. It's like making the assumption that if you say something in a room full of people, you might see it on CNN later.

And maybe that sucks - we're being told to choose between sharing everything we do on the internet, in every way in which it can be shared, and not sharing anything (or, hardly anything), and that is a tough choice. Kind of like the choice you make between keeping your thoughts to yourself, and maintaining a constant out-loud stream-of-consciousness.

Yes, I realize that allowing FB to access my location, or allowing my phone to transmit information to the Google network means that my motions can be tracked. But I'm trying to think of how many people I know or stories I've heard of where bandits used that data to mug someone on their way out of the swanky new bar they just checked into... And I can't. Mugged, sure. Due to a FourSquare check-in? I don't think so. It's still easier to stalk the old fashioned way - by tailing someone. So, the police can find me. My government can find me. Presumably, bandits could find me. But I have to say, that's a risk I'm willing to take to brag about the Bat Cave awesome restaurant I just went to.

So, maybe the choice isn't about sharing everything and not sharing anything. Maybe it's about how much faith you have in the good will (or apathy) of your fellow human beings (and corporations) and about how important it is to let everyone know what you had for lunch and which facial moisturizer is your latest favorite.