Changing My Definition of Femininity - An Ode to My Bike

When I first met her, I thought she was beautiful. I didn't know what kind of bicyclist I would be. Roads? Trails? Three miles a week, or more than that? I didn't know. But this bike... She was purple, with a step-though frame, and flowery vines painted on. Anyone who saw this bike would know it was a woman's bike, no question.

Few things give me as much joy as dismounting. I slow way down, pull one leg through the frame to sit side-saddle, then hop off and start walking. I imagine that I'm a slip of a girl - light and lithe, like a fairy princess - gently tripping along the ground. I always stick the landing, but... Well, at 5'9" and almost 200 lbs, I am nothing like a fairy princess.

I started taking longer and longer rides, working from "Whew! Three whole miles!!" to a 7-mile commute, then a 10-mile weekend ride, then 20 miles, then 30, and then I did a metric century (100km, or 62 miles). I started biking to work, and got panniers to put on her rack so I could carry my work clothes and towel - yes, my commute is far enough that I have to shower when I get there. 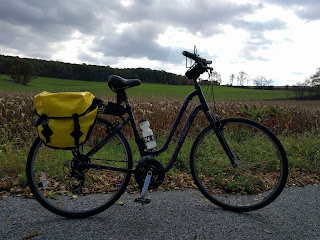 Gradually, I came to realize this was the wrong bike for most of what I do. She's heavy and bulky. And while her geometry allowed me to bike in a dress and maintain some modesty, it's not even slightly aerodynamic. I knew I needed a road bike - something faster, with more room at the top of the gears. But I loved my step-through frame. No road bike would have that, and I was bummed that I'd have to give it up.

My marvelous local bike store (Crofton Bike Doctor) set me up with a bike someone had traded in - a Specialized Ruby. A carbon frame with a nearly horizontal crossbar, pedals you have to clip into, and drop-down handlebars like a ram's horns. She's not a very girly color. But she is slender, and light, and nimble. And she's fast and strong. This bike wants to go uphill. She wants to beat the motorized vehicles on the downhill... and she gets much closer than my hybrid ever did.

With my hot pink helmet, my hot pink-trimmed biking shoes, and all the flowery, girly-colored spandex I can find, I think we're still feminine enough.
Posted by Jenn Carson at 6:22 PM No comments:

Why I'm Not Excited About a Female Doctor Who

I wasn't shocked when I got the news that the next Doctor would be a woman, Broadchurch's Jodie Whittaker. People have been calling for it ever since River Song kicked so much butt, and there were announcements that no, the next Doctor would not be a female. So, having convinced eager fans it wasn't to be, the time was ripe. I wasn't shocked, but I was pleased. It really is about time.

You know what else didn't shock me? All the backlash.

So, here's why I'm not excited about a female Doctor Who:


How long could she last? Even if the number of fans who oppose her is small, even if she is the perfect woman actor, even if - relatively speaking - she isn't opposed much more than any man would be? Those hopes for little opposition aren't looking good, by the way. And she hasn't even gotten on the set, yet.

Don't get me wrong: The world needs her. Women need her. I need her. I hope like hell she outlasts the bastards.

TL;DR - the world is full of joy-stealing bastards who win all too often, and I'm old and jaded. I love that a talented female actress has been chosen for the part. It is about damn time. I just can't let my hopes get too high, yet. But I'll be the first to throw a fancy, themed party when she's three seasons and one episode in.

* Before you freak out, I'm not saying people who didn't vote for Hillary are bastards. I'm saying that when you say, "I want a woman _____, just not this woman, let's get another guy this time, maybe we'll try this little experiment again in a few years" you're a lying bastard. If you want a woman doctor/lawyer/president/actor/CEO, you have to go ahead and hire one, or else admit you don't really want one in the first place.
Posted by Jenn Carson at 9:18 PM No comments:

It's Different When They're Yours

"How was your day?" I asked my 14-year-old, as I settled into my chair.
"Meh." She shrugged and I sighed. Right. Open-ended questions.
"How was your commute?" We both ride our bikes to get where we're going. I do so when the weather's nice and it's not too much of an inconvenience. She does it every day, unless we offer her a ride in the car. That doesn't happen often. For her, biking means freedom and speed.
"Oh, my God! I was coming up to this crosswalk, so I slowed down, and this guy in his car on his phone almost..." I had opened the floodgate.

I pasted what I hoped was a mildly concerned look on my face as I listened to her talk about her near-miss. Some one wasn't paying attention and got way too close, drawing the ire of the crossing-guards and a lecture. I reviewed traffic patterns with her - people biking are safest when they behave in traffic like people driving, but that can be difficult to do if you've never driven. She was where she should have been, doing what she should have been doing. It was like any other near-miss, only it wasn't, because it was my daughter.

I knew a few things immediately. 1) No, I couldn't go kill someone. 2) Of course she would ride tomorrow (I reminded myself that this was a good thing). 3) We couldn't tell my husband.

When I started biking more, I would come home after a ride, still hopped-up on adrenaline. My husband would ask how my ride was, and I would recount all the details of whatever incident could have put me in the hospital, but didn't.

I should tell you, my husband is an avid runner. He's had his own near-misses. He's supportive of my biking to a fault; he knows how important his running is to him. He also knows about drivers and attention and infrastructure for anything other than cars.

I would watch his face as I vented my anger at the person driving. The carefully controlled, mildly concerned expression, the shrug, and the "Yeah - drivers. You'll have that" comment. I could tell, though, that he didn't like it. I had put him in a tough spot. He couldn't tell me not to ride; he knew riding on the sidewalk wasn't an option for me (it's not legal here and is rarely a safer, much less a more enjoyable option); and yet...

Eventually I stopped sharing my stories. If pressed, I'd say something like, "I just need to review some footage from my ride." I ride with a Fly6 - it captures video of things going on behind you while also acting as one of the best tail-lights I've ever seen. Sometimes, the close-call isn't as bad on video as it was when you were riding. Or that's what you can tell yourself.

How can you protect the people you love and allow them their freedom? Where's the balance point?

When my daughter turned 15, she started a new job about three miles away. She could ride her bike, though, unlike her route to school, her route to work would take her along some of the busier streets. I upgraded her lights. We talked about the importance of paying attention and route options.

Her birthday isn't until the winter. But maybe, for my birthday, I can get her her own Fly6. Maybe the newer, more expensive, front-facing Fly12 to go with it.
Posted by Jenn Carson at 3:38 AM No comments:

The Meaning of Travel

We didn't have much money, but I was able to put four round-trip tickets onto a credit card for us to go visit my parents on the West Coast. I had bought the tickets using one of those bargain sites and when we got to the airport, the confirmation number I had wouldn't pull up any flight information. I found out from the attendant behind the counter that my flight was actually not leaving from Charlotte, but from a smaller airport about an hour and a half's drive away. Our plane was to leave in an hour and a half. We weren't going to make it.

With no money to buy new tickets and no refund available, I knew I was defeated. I would have to explain to my kids that our week-long vacation wouldn't happen. That despite weeks of careful planning, they wouldn't see their grandparents for another year or more. That all my careful shopping still meant $1,650 went down the drain, and there were sooo many places it could have gone. That I wouldn't see my mother.

We would have to just go back home. What would we do for that week? How could I entertain us with almost no money? What hope did I have of rescuing that vacation without feeling the constant pain of missing my parents? What would I tell them?

I did the only thing I could: I started weeping. Nasty-crying in the middle of the arrivals gate. My kids were embarrassed and confused. My husband was embarrassed and powerless. The attendants wouldn't make eye-contact. It was awful.

My story has a happy ending. After a few minutes of sobbing, an attendant hurried over to us. Didn't I get the phone call? They had left messages on our home phone. We had been driving. The flight that was supposed to leave from the smaller airport was cancelled. We would have to re-book at no additional charge. They had a flight that would leave in two hours. There were seats available for us.

I can't. I can't imagine that.

That's why we need to work to ensure those who were told they could get here can do so. I hope they get their happily ever after, too.
Posted by Jenn Carson at 8:22 PM No comments: